We had a very "interesting" game last night between the Falcons and Panthers.

Who would have thought that D.J. Moore would only have 2 receptions on 6 targets for 55 yards? Bridgewater didn't really look at him, even though he could have run all over this Falcons D who have allowed an average of 28.14 receptions/game, 11.85 yards/reception, and 2.71 receptions TDs/game this year. I'm sure someone will claim that they predicted it...

Curtis Samuel owners were the obvious winners of this game. Samuel ended with 3 rush attempts for 23 yards and 1 rush TD and 4 receptions on 5 targets for 31 receiving yards and 1 receiving TD for 19.40 0.5PPR points. He had a great game and seemed to have soaked up Davis' (66 rush yards on 13 attempts, 11 receiving yards or 1 reception and 2 targets, equaling 8.20 points) and Moore's fantasy potential and points.

Teddy Bridgewater had an okay game and went out for a little after a terrible hit to the head from DE Charles Harris. He was evaluated for a concussion and came back on the field after Phillip Walker subbed in at QB. Teddy ended with 15/24 for 176 pass yards, 1 pass TD, 1 INT, and 30 rush yards on 5 attempts. He finished with 12.04 points.

Todd Gurley owners had a gut-wrenching time watching this game. He did not have much production throughout the game until his 3-yard rush TD in the 4th. Gurley ended the night with 46 rush yards on 18 attempts and 1 rush TD, equaling 10.60 points. If Gurley hadn't scored the late-game rush TD, Brian Hill would have ended the game with a better stat line of 55 rush yards on 11 attempts and 9 receiving yards from 1 reception and 2 targets that equaled 7.40 points.

Calvin Ridley owners are definitely worried after the total fantasy point WR1 (118.90) and fantasy point/game WR4 (16.99) left the game with an apparent ankle injury. He did walk off the field on his own but ended the night with only 42 receiving yards from 3 receptions and 4 targets. He is scheduled for an MRI and I expect the Falcons to hold him out until after their week 10 BYE.

Julio Jones had ended with a spectacular 137 receiving yards (85 came in the first 10 minutes of the game!) from 7 receptions and 10 targets equaling 17.20 points. The discouraging thing about this is that Ryan and Jones failed to connect on 3 red-zone targets. Julio definitely benefitted from Ridley leaving the game with an apparent ankle injury and will benefit in week 9 against Denver, unless Ridley's recovers quick enough(as mentioned above, I don't expect that to happen).

Matt Ryan had a decent game with 21/30 for 281 pass yards, 1 INT, 27 rush yards from 6 attempts, and 1 rushing TD. Yes, he scrambled for a TD. Gurley and Julio owners are probably upset that Ryan scrambled for a 13 yard TD, but he saw an opening and ran for it and it was one of the deciding factors that lead to the Falcons win. They definitely need the win.

The WRs seemed to go in the opposite direction of my rankings.

The RBs were pretty much in the same order as my rankings, aside from not ranking Qadree Ollison.

The TEs were very close to my projections and rankings. Thank you TEs!

As always, please feel free to leave me feedback and comments. 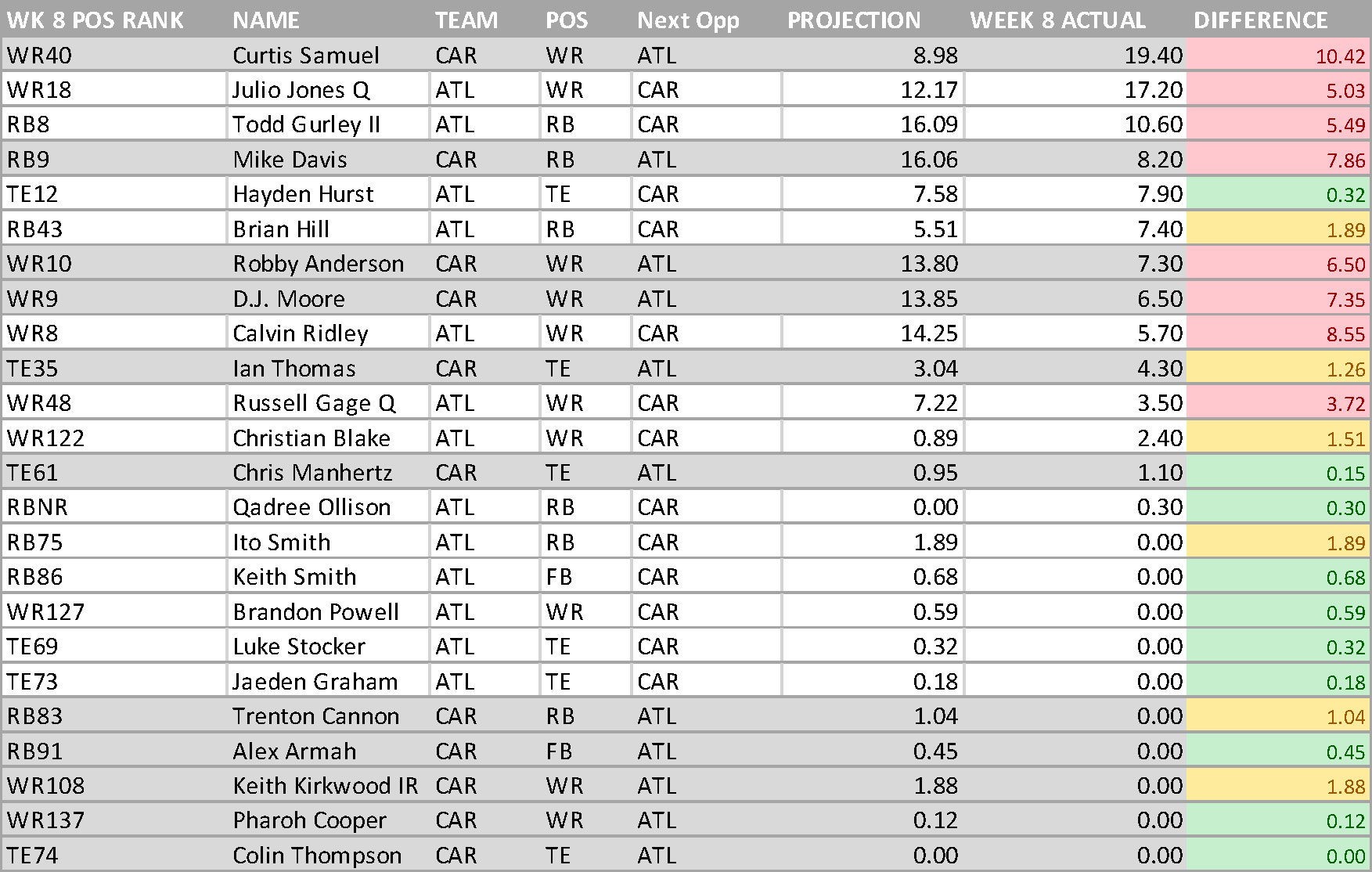 Here are my Week 8 Rankings. Feel free to leave feedback, comment, or even reach out on Twitter and ask a question. Good luck!

I have included am easy-to-read CheatSheet below.

I have a finance and economics background with a focus in statistics and I have been doing fantasy football for 10+ years. Once I learned to combine my skills and interests, it was a whole new ball game. I have a passion for football and sports in general and Fantasy Football adds to my passion and excitement of every game.